Completed Races:
4/8/2017 – Savannah Women’s Half Marathon – 2:35:27
While this was my slowest, non-trail, half after an ugly training cycle my only goal was to enjoy running on my 35th birthday.  Goal met!  This race delivered and it is one I would love to do again.

11/6/2016 – NYC Marathon – 6:26:25
The race where I forgot the most important of all marathon goals – to finish injury free and smiling.  I forgot to include that one when I set my goals and man it came back to bite me in the butt.  NYC was the most painful race I have completed, due to a horrible tendinitis flare up, but I struggled through and finished since it will probably be my only chance at NYC – that lottery is tough!

6/9/2016 – Race the Landing 5K Series – Race 4 – 30:20
I had no time goal in mind and just wanted to take it easy for a few reasons.  Mainly, the fact that the day before had been leg day at Orange Theory Fitness and my glute muscles were on fire and I knew I had to wake up the next morning and do my 10 mile long run before jumping in a car to Asheville, NC.  I knew really pushing it would not only kill my tired glutes, but also my long run the next morning so my only plan was to enjoy the run.

6/02/2016 – Race the Landing 5K Series – Race 3 – 32:05
The truth is I was no longer here to race, instead I was just focusing on running and having a good time because building a marathon base without getting hurt is more important that a 5K race right now.

7/9/2015 – Race the Landing 4K Series #5 – 39:something
After a tough weekend of running in Atlanta my left calf muscle was really bothering me.  Add that in with the triple digit temperatures at race time and a friend and I just were not feeling it so we ended up walking the final race of the series.  I was by far my slowest, but also a ton of fun!

6/11/2015 – Race the Landing 5K Series #4 – 29:51
A week later I was back with the same goal, to help pace a friend to her first sub30 half.  It was hot and sticky and not the race I would have chosen for her PR attempt, but she pushed like crazy and fought through to make this her first sub 30 and a brand new PR.  I had the most amazing time pacing her and getting to cross that finish line with her.

6/4/2015 – Race The Landing 5K Series #3 – 30:50
I went into this race with a new goal – helping a friend run her first sub30 5K.  In the end, even with the numerous walk breaks we had to take due to the crazy humidity, we came in at 30:50, she only missed her goal by 50 seconds.  While it wasn’t the race we wanted I am very proud of her because she had a really tough day (some runs are just like that) and she gave it her all and pushed through.  Next week is race number 4 and we will again be trying for that sub30.

5/15/2015 – Race The Landing 5K Series #2 – 27:02
I was pushing with all I had, exhausted – yet I just wasn’t hitting the splits I was able to hit last week.  It is funny how I felt like I was working even harder, but in actuality I was running slower.  I guess you just never know how things will turn out with all the variables on race day.

12/13/2014 – Kiawah Island Half Marathon – 2:10:40
Kiawah is a flat, beautiful course.  In all honesty I really prefer it over the Charleston marathon.  However, this time I decided to use it to work on some things I struggled with last month in Savannah , namely finishing speed, so that I could aim for a 2:10 at the Charleston Half next month.  It was a great day and a great run.  I was even able to pick it up a bit at the end and was so happy with my performance.

12/6/2014 – Reindeer Run 5K – 27:30
This is the one local fall/winter 5K I make sure I am able to run each year.  It usually has great weather and it is a flat, beautiful course – all perfect for PR attempts.  I went into this with a big goal, getting my first sub 28 minute 5K time which would be an instant PR and the weather cooperated perfectly.  It was tough, but I am so proud.

11/27/2014 – Gobble Wobble 5K – untimed
I did this race without any goals and walked the whole thing with a running buddy of mine who had gotten pregnant and was no longer able to run it as she has planned.  It was a nice morning and gorgeous weather as we walked and talked.

10/11/2014 – Low Country Trail Half Marathon – 2:37:39
Officially my slowest half ever.  I just couldn’t get my footing and didn’t want to trip so I slowed way down and just enjoyed the scenery.

11/28/2013 – Gobble Wobble 5K – untimed
Burrrrrrr…. One of the coldest Thanksgiving mornings in Charleston in a while.
It was cold waiting for the race to start, but I had an awesome time running with my sister-in-law.

11/6/2013 – Festival of Lights 2 miler – untimed
This one was all about enjoying the gorgeous holiday lights with friends.
Super fun, I think I will do it every year.

10/12/2013 – Lowcountry Trail Half Marathon – 2:26: 50
My goal was to beat my Dirt Dash time, but this trail was much more intense so my goals shifted to:
Don’t fall, trip, or get hurt.
Don’t get lost.
I achieved both goals and had an amazing time doing it!

9/7/2013 – Francis Marion Dirt Dash Half Marathon – 2:24:18
I did not know what to expect from a trail race and I just could not get my stride on this one, but I enjoyed it and will be back next year.

04/27/2013 = The Country Music Marathon = 4:57:34
I did not meet my 4:30 goal, or even my altered 4:45 goal, but I did get a 16 minute PR.  I am proud of this considering it poured rain the entire time, I was drugged up on antibiotics for strep throat, and my hamstring/glute are still fighting me – being able to push through this one and finish was quite the accomplishment.  Marathon number 2 in the books.

01/26/2013 = Charlie Post Classic 15K (9.3 miles) = 1:31:10
I’m back!  The Charlie Post 15K feels like my return to running.
I was pacing myself! – My running partner wasn’t there pacing me, no music was getting me through, some fancy watch wasn’t telling me how fast I was going.
Finally, my body was falling back into it’s old rhythm.  Good heavens it was a brilliant run!

12/08/2012 = Kiawah Island Half Marathon = deferred until 2013 due to injury
After so many months of not running I was not willing to risk it – my Kiawah Island Marathon Deferment was the right decision as I was only up to running 6 miles at the time.

10/28/2012 – Marine Corp Marathon = deferred until 2013 due to injury and physical therapy
My Marine Corp Marathon Deferment was a very hard decision.  I was really looking forward to this race and to miss it was so tough, plus in addition to that not knowing when I’ll be healthy and able to run again is very rough.

3/31/2012 – Cooper River Bridge Run 10K = DNS
I wanted so bad to try and run this and beat my 55 from last year, maybe a 54 or 53.  However, I was on strict doctors orders, “NO EXERCISE.”  Instead I played chauffer and dropped G & T off and hung out downtown for about 4 hours waiting to cheer them across the finish.  Then I had a doughnut and bratwurst with them, because I paid the entry fee and had my bib and everything and therefore was sure I deserved that food, $45 and no race, I was getting my money worth. 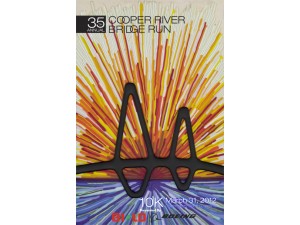 01/08/2012 – Disney World Marathon  = 5:13:31
…and then it hit the fan.  T and I were on perfect pace to finish at 4:30 and then something horrible happened in my right foot.  It was a shooting, crazy pain every time I stepped.  My face was in a permanent wince except when I would try real quick to fake a smile for the cameras.  My pace dropped from 10:30ish to 12 to 15 min miles.  Ouch!  I was really disappointed in myself.  However, I tried to look at the bright side I did finish a marathon.  Plus as stubborn as I am after about 10 minutes of complaining about my bad finish I decided I had to beat that ugly time.  Enter marathon number 2. 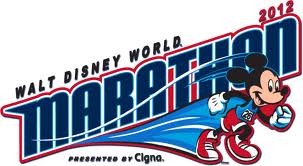 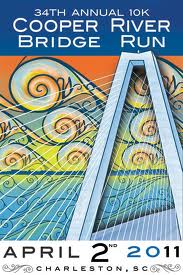 1/15/2011 – Charleston Half Marathon = 1:58:27
While I may have fallen in love with running before and even become a regular runner in the past year, this race made it official.  Obsession!
I knew I wanted to run more and I knew that I would need a buddy to motivate me.  T is the type who cannot say no to any physical challenge (she plays rugby, lacrosse, hockey, and anything else you throw at her) so I asked her if she would be interested in trying some races with me.  This was our first race together and our sub 2 hour time exceeded even our hopes.
I have never been prouder.  At this time we decided it was time for a marathon.

3/27/2010 – Cooper River Bridge Run 10K = 58:12
I had been running even more, some might even say on a regular basis.  I came in with the goal of breaking an hour.  I was super happy with my performance.  Then C’s dad pointed out that he beat me by exactly 2 seconds.  I blame this on the fact that C tripped and I stopped to help her up.  Where were you then dadio? 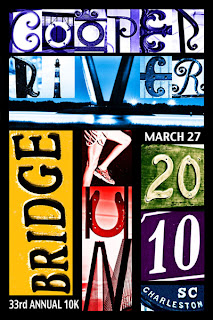 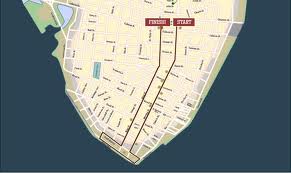 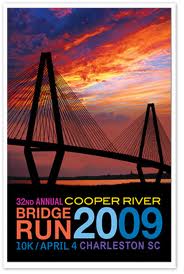 04/ 05/2008 – Cooper River Bridge Run 10K = 1:10:05
This is what happens when you hardly run for the 4 months after your half marathon.  I had fun running the race though and felt the desire to do better.  This may be about the point the running bug first struck. 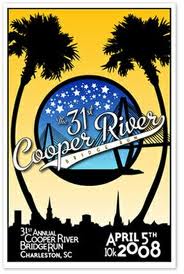 I'm Abby, Abigail if I am in trouble. I wear many hats - a teacher, social media influencer, blogger, runner, and running coach (and so much more it would make you tired). I LOVE helping others avoid the mistakes I made when I first started out. I do this by teaching you how to work smarter, not harder, both when it comes to using social media/blogging to grow your brand and also when it comes to training for that next race. Read More …

This error message is only visible to WordPress admins

BackatSquareZero does not share personal information with third-parties nor do we store information we collect about your visit to this blog for use other than to analyze content performance through the use of cookies, which you can turn off at anytime by modifying your Internet browser's settings. We are not responsible for the republishing of the content found on this blog on other Web sites or media without our permission, or for the privacy policy of other sites we link to. This privacy policy is subject to change without notice.View the full Privacy Policy:
http://www.backatsquarezero.com/privacy-policy/

I am not a nutritionist, sports medicine doctor, certified personal trainer, therapist, medical doctor, or anything else fancy like that.
All suggestions, ideas, and stories shared on this blog only reflect what has worked for me on my journey from overweight and out of shape to marathon runner and through my RRCA Run Coaching Certification.
The information given is for informational purposes only and no guarantees are made concerning the accuracy, reliability and completeness of the information, I accept no responsibility for errors or omissions.
When making health and exercise decisions be sure to think about what is best for you and to first consult a medical professional to make sure your body is healthy and ready for exercise.