So as you all know by now my workout of choice is a long (pretty slow) run – nothing fast and for sure nothing hilly.  However, I have come to the realization that I am not going to grow and improve as a runner if I always do the exact same thing.  Besides I kind of have in the back of my mind to make this the year I am in the best shape of my life.  You know make 30 better than 25, 21, or even 18 so that goal always stays in my head (haunting me).


So when a Groupon for 4 Barre classes went on sale for a decent price I jumped on it like a kid an Abby on a candy bar.  Barre seemed like a great thing for me to try – strengthening moves using you body weight and stretching (which is probably what I am worst at – seriously I somehow forget to stretch after EVERY run).


I drove the 30 minutes (across two bridges – that’s how we tell drive time in Charleston) to Mt. Pleasant.  Since the studio was only about a mile from the Cooper River Bridge I decided I’d kill 2 birds with one stone (try something new and do something I hate, but need to work on) by getting some hill work in. However, I happened to forget while not working out (I guess you call that resting) for days and popping anti-inflammatories like candy for my back that I had pulled my hamstring about 2 weeks ago.  When I walk and take it easy it isn’t too bad, but after numerous days off my hamstring was surprised when I ran last night and decided to show its outrage by rebelling this morning.  I took a couple running steps and it hurt bad.  Old version Abby would have run through the pain, but I am trying to be smarter about this, know I have a marathon coming up, and didn’t want to injure it more so instead I decided to take a relaxing walk in hopes of not aggravating it.  I happened to see a trail opening in a back corner of the parking lot so instead of making my way to the bridge, which would tempt me to run, I check it out.  Nice little 2 mile walk. 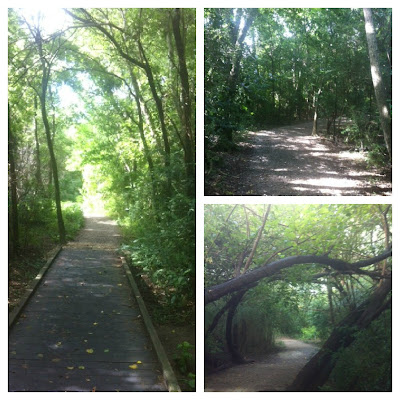 Then it was off to Barre class.  I was really nervous because I tried yoga once, but as I have no balance (or coordination, or grace, and am instead a clumsy, awkward hot mess) I kept tipping over, falling down, and basically crashing out of the poses.  The instructor loved me.  HA.  They were praying I never came back.  So while I was excited and knew it would be good to try something new I was also super worried about not being able to do it or embarrassing myself in front of everyone.  I put a Twitter plea out asking for luck and well wishes (@BackatSquare0) and was flooded with support which really psyched me up to go in.  Thanks guys:)
The place itself (BarreEvolution in Mt. Pleasant) was gorgeous!  Like what I envision some fancy New Your or LA ballet or yoga studio looking like, not like the sweaty spin rooms which have been my most common form of cross training.  The ladies were really nice too.  They signed me in, introduced themselves, showed me where to put my bag/shoes, and then introduced me to the instructor.  Luckily I had gotten there about 10-15 minutes early which gave her time to explain the equipment to me and help relieve my worry a bit. 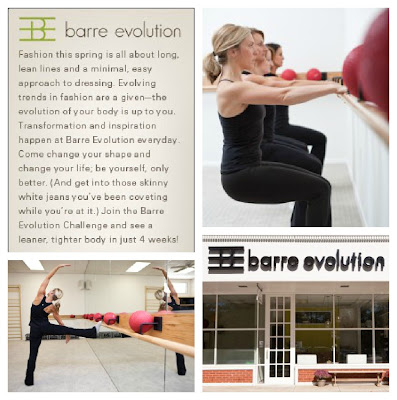 The class is split into four section: arms, legs, butt, and abs.  The goal is to work each muscle group until it is totally fatigued and then to stretch it out (supposedly to make me look long & lean like a dancer – here’s to hoping – I’ve got the long, come on lean!) before moving on to the next muscle group.  The class was done using weights, bands, balls, and mats.  I never lift (another goal I am trying to work on) so they suggested I use the 2 pounds weights and by the end I could still really feel it.  The leg section was the most intense though.  As a runner I have pretty strong, very bulky legs which I take great pride in, they let me run 26.2 miles, so they are by far the favorite body part.  I was really surprised because I thought that would be the easiest part for me, but at one point my legs were quivering so much I could see them shake and I had to stop for a second, put them flat on the floor, shake them out, and then try to get going again.  Wow!  I am really excited that I have 3 more classes I get to go back for.  (I already booked two for next week.)  After the Groupon is over I am not sure if I’ll be able to continue as it gets pretty expensive (over $20) for each class.  However, I think doing this on my cross training day once a week would be a great way to get some extra strength training and stretching in during marathon training.  Ideally I’d love to do it twice a week, if I could figure out a way to fit it into the marathon training schedule, or maybe go more when I am not currently in full training mood (and if I was rich so the expense wasn’t an issue).
Want to try barre at home?  Here is a tip from the studio I went to today.
Have you ever tried a barre class?  What type of fitness classes do you enjoy taking?
Finally, If you could try one new type of workout or workout class what would it be?

I'm Abby, Abigail if I am in trouble. I wear many hats - a teacher, social media influencer, blogger, runner, and running coach (and so much more it would make you tired). I LOVE helping others avoid the mistakes I made when I first started out. I do this by teaching you how to work smarter, not harder, both when it comes to using social media/blogging to grow your brand and also when it comes to training for that next race. Read More …

This error message is only visible to WordPress admins

BackatSquareZero does not share personal information with third-parties nor do we store information we collect about your visit to this blog for use other than to analyze content performance through the use of cookies, which you can turn off at anytime by modifying your Internet browser's settings. We are not responsible for the republishing of the content found on this blog on other Web sites or media without our permission, or for the privacy policy of other sites we link to. This privacy policy is subject to change without notice.View the full Privacy Policy:
http://www.backatsquarezero.com/privacy-policy/

I am not a nutritionist, sports medicine doctor, certified personal trainer, therapist, medical doctor, or anything else fancy like that.
All suggestions, ideas, and stories shared on this blog only reflect what has worked for me on my journey from overweight and out of shape to marathon runner and through my RRCA Run Coaching Certification.
The information given is for informational purposes only and no guarantees are made concerning the accuracy, reliability and completeness of the information, I accept no responsibility for errors or omissions.
When making health and exercise decisions be sure to think about what is best for you and to first consult a medical professional to make sure your body is healthy and ready for exercise.